Home > How Can You Put the iPad Pro’s Apple Pencil to Work? 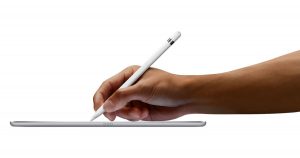 The Apple Pencil goes far beyond your typical iPad stylus. It offers new levels of precision and control for business users looking to make the most of the iPad Pro.

You can draw on an iPad screen with your finger, but it’s far from precise. Thankfully, you’ll find plenty of pen-like styluses with a fine tip that work with an iPad. These make it easier to draw or write on the screen. A few, like the Bamboo Intuos Creative, are also pressure-sensitive. So, when combined with the right app, you can draw a light or heavy line depending on how much pressure you apply.

The Apple Pencil takes things to the next level. However, it’s only designed to work with the iPad Pro. While it comes in larger sizes than your standard iPad, the iPad Pro also offers a sharper screen and more grunt under the bonnet.

Get more out of the iPad Pro

The new iPad Pros also feature a “ProMotion” display with a variable refresh rate up to 120Hz. The Apple Pencil can take advantage of this. It ensures the tablet increases the refresh rate while you’re drawing on the screen to improve responsiveness and accuracy.

Run the Apple Pencil across the screen and a line appears much more quickly than if you were using your finger or another stylus. This makes it much easier to write naturally or sketch out ideas. The difference is partly due to the Apple Pencil making the most of that 120Hz screen refresh rate, and partly due to the fact the iPad Pro predicts what you’ll do next a split second ahead of time.

As Apple’s own stylus, the Apple Pencil is more tightly integrated into iOS. That means it works with more apps. Major third-party developers are also on board. Microsoft apps such as OneNote support Apple Pencil, along with note-taking rival Evernote. Apple’s stylus also works with Adobe iOS apps. These include Lightroom and Sketch, along with AutoCAD 360. These high-end apps benefit from the iPad Pro’s faster processor, extra RAM and support for Apple’s Metal hardware-accelerated graphics.

Along with pressure sensitivity, the Apple Pencil’s key advantage over other styluses is that it features a secondary sensor on the side of the nib that lets the iPad Pro know when you’re holding the Pencil on an angle. This means in illustration apps you can tilt the Pencil and shade in areas on the screen, just as if you were shading with the side of a real lead pencil.

If you’ve tried using a stylus with a tablet in the past and been less than impressed with the results, it’s worth taking another look at the iPad Pro and Apple Pencil.