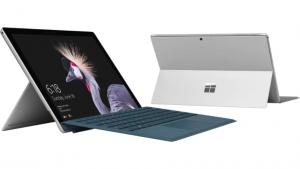 Apple and Android tablets are certainly useful productivity tools when you’re on the go. However, if you need Windows, then look to Microsoft’s Surface Pro, which converts from a notebook to a tablet.

While rivals run a smartphone-style operating system, the Surface Pro runs a full version of Windows 10 just like a desktop or notebook PC. That means you can use the same software and services as you jump between devices during the day.

At first glance, the Surface Pro looks like a tablet with a large 12.3-inch touchscreen. However, when you open the cover, you discover it features a full-sized keyboard with a trackpad.

You can fold out the stand on the back of the screen – which sits at any angle – and then stand the Surface Pro upright on a desk so you can use it like a traditional notebook. Of course, it’s a touchscreen device, so you can still take advantage of Windows 10’s many touch-friendly features.

The Surface Pro is blessed with powerful Intel processors and plenty of RAM like a desktop computer, yet still offers all-day battery life like a tablet. You also have access to desktop-style connectors like a full-size USB3.0 port, microSD card reader, headphone jack and Mini DisplayPort for connecting to an external screen.

When you’re ready to move, you can pick up the Surface Pro and fold the keyboard behind the screen. It’s attached with magnets so you can detach the keyboard cover completely when you don’t need it.

Remember, the kickstand on the back sits at any angle, so you can also sit the Surface Pro upright in tablet mode or lay it right back. With the keyboard detached you’ve got access to the onscreen keyboard when you need to type.

With Windows 10 you’ve also got access to tablet-style apps in the Windows App store, designed to make the most of the touchscreen. You can also use a stylus to write on the screen, and many apps support handwriting recognition.

The whole thing weighs less than 1kg, so when it’s time to go you can easily put it under your arm or slip it in your carry bag as you walk out the door.