Home > What Are the Differences Between the Oculus Rift, HTC Vive and Samsung Gear VR Headsets? 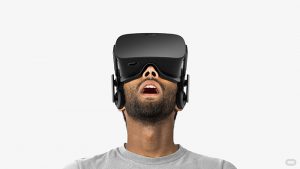 Virtual reality (VR) offers a great way to impress your clients, but don’t make the mistake of assuming all VR headsets are the same.

VR isn’t just for gaming and whisking people away to a world of make believe – it’s also a powerful business tool. It’s the perfect way to share your big ideas with clients, show potential customers what you offer, or simply bring your business data to life in the boardroom.

The Oculus Rift, HTC Vive and Samsung Gear VR are three popular VR headsets, each designed to immerse you in an interactive virtual world. They each have their strengths and weaknesses, so it’s important to do your research before you take the plunge.

Of these three headsets, the Samsung Gear VR is the odd one out, because unlike the other two it doesn’t rely on an attached computer. It’s completely cable-free, because it’s powered by a Samsung smartphone that acts as the screen – offering a slightly different image to each eye to help create a sense of depth.

This makes the Gear VR a great choice if you’re looking for something portable that doesn’t require an external power source, plus it’s easy to set up and pack away. The downside is that the picture quality isn’t as sharp as the others and it doesn’t offer the same level of interactivity.

The motion sensors in the smartphone let the Gear VR detect when you move your head, so you can stand or sit still and look in any direction at the virtual world around you. Unfortunately, you can’t move around, as the phone can’t detect when you take a step to the side or crouch down.

The Oculus Rift and HTC Vive take things to the next level by using sensors to track your movements. The HTC Vive comes with two cameras to place up high in the corners of the room. Meanwhile, the Oculus Rift can work with a single desktop sensor or you can add extra sensors to cover more of the room, although it can still struggle to match the HTC Vive in this department.

This kind of set-up means the headset knows both what you’re looking at and where you are in the room, giving you more freedom to move around in the virtual world. Take a step to the side and your perspective changes, letting you look around an object in a way that’s impossible with the Gear VR. The HTC Vive also has the benefit of a front-facing camera designed to track the world around you, which some apps can use to warn you when you stray too close to walls in the real world.

The downside of relying on the Oculus Rift or HTC Vive is that you need to set up the cameras and calibrate the system for the room. Of course, your ability to walk around is limited by the fact that these headsets are still tethered via cables to a computer. Some VR set-ups get around this by running the headsets from a powerful portable computer worn in a backpack, but it’s a complicated arrangement.

These two headsets also let you use your hands, with wireless handheld controllers that you can see in the virtual world so you can interact with virtual devices. The Oculus Rift also works with an Xbox One Controller.

Like any IT project, the first step is to decide what you’re trying to achieve and then choose the best tools for the job, rather than starting with specific hardware and then working backwards. Investigate the applications available for each platform and consider your requirements in terms of handheld controllers and motion-tracking to decide which are best-suited for the virtual reality experience you want to offer.

The simplicity of the Samsung Gear VR makes it a great starting point, but if you’re looking to take Virtual Reality to the next level then it’s worth weighing up the HTC Vive against the Oculus Rift.