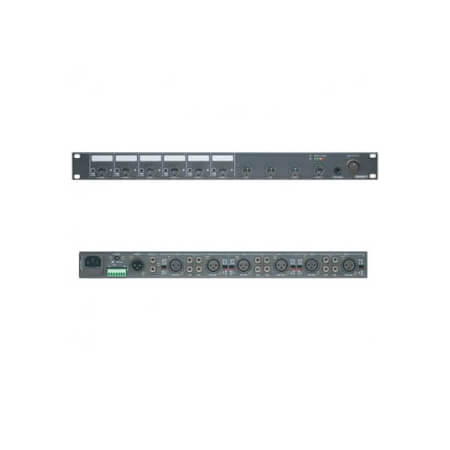 The Australian Monitor MX61 Microphone Mixer simplifies the task of mixing microphone or other audio inputs for applications where a desk typ mixer such as the AM20FX or AM12FX is over the top.

Offering basic functionality, the Australian Monitor MX61 Microphone Mixer has 6 individual inputs, each able to accept a balanced XLR input which is selectable for either Line or Mic level signal. Each input also has a balanced line level input via a pair of RCA jacks. All inputs have an individual level (Volume) control and selectable phantom power insertion for powering microphones that require it.

Main output is balanced XLR Line Level but the Australian Monitor MX61 Microphone Mixer also features a Record Output via a pair of RCA connections and a TRS headphone jack. Output controls include Bass, Middle and Treble adjustments of 12dB below and above 0.

The Australian Monitor MX61 Microphone Mixer will suit applications where up to 6 microphones or other Audio Sources need to be connected to a single microphone input on an audio system and is especially suited to work with radio microphone reciever kits, adding individual volume controls for these without the need for a more complex desk type mixer.

If you need to do the opposite, and connect one source to multiple outputs, you need what is called a MIC S