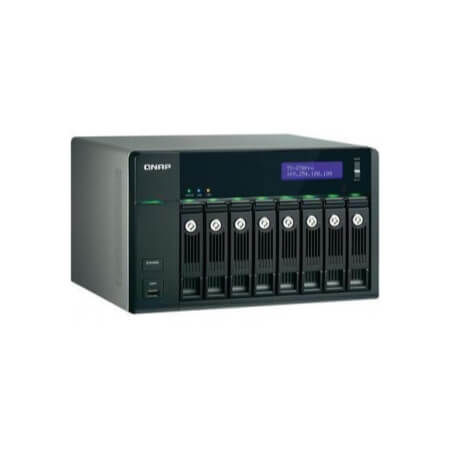 For rental requirements calling for large amounts of data storage as economicallyas possible where it might be possible to compromise on functionality, then the QNAP 8 Bay SATA NAS is the answer.

The QNAP 8 Bay SATA NAS features 8 hot pluggable drive bays which can be populated with up to 8 x SATA Hard Disk Drives or 8  x SATA Solid State Disk Drives of various capacities which can then, via the integrated RAID controller, have their capacities combined for speed (RAID 0), Mirrored for redundancy (RAID 0) or both (RAID 10). Also available is RAID 5, where one drive’s capacity is sacrificed to store parity data ensuring data integrity of the remaining drives in the case of any one drive failing.

Connectivity is via the dual integrated gigabit ethernet adapters which support configurations such as failover, link aggregation and connection to seperate networks. TheQNAP 8 Bay SATA NAS will also support iSCSI for direct attached or Storage Area Network (SAN) applications. These ethernet adpaters can be upgraded to support 10 Gigabit ethernet and iSCSI (SFP+).

Management is via the integrated Linux based OS which is powered by a dual core intel i3 CPU. Network configurations, RAID setup etc are all easily managed via the web interface but the QNAP 8 Bay SATA NAS also includes a basic control interface on the front panel which can be used for simple tasks such as setting IP and RAID configurations.