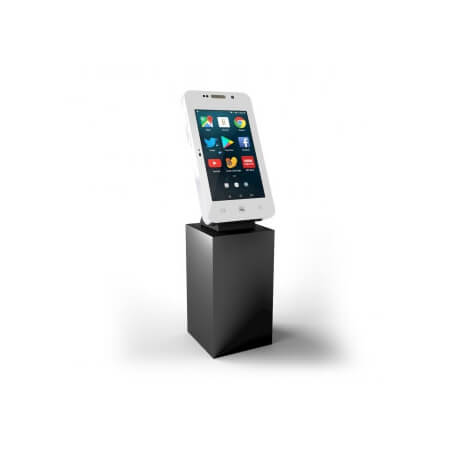 The Giant iTab 27 inch presents as an oversized smartphone able to replicate practically any mobile device operating system including Android, IOS and Windows. This makes for an intuitive and familiar user experience allowing for demonstration of applications and implementation of interactive content in a way that end users are already intimately familiar with.

Able to be used in either landscape or portrait orientations, the Giant iTab 27 inch features a 10 point multi-touch projected-capacitive touch interface enabling it to exactly replicate the control inputs used on a smartphone or tablet including all touch, drag and multi-touch controls. Further to this, the Giant iTab 27 inch also features a built in web camera which can be utilised in any communication or other applications that use the forward facing camera on a regular smartphone (Currently only supported in Android and Windows configurations).

The Giant iTab 27 inch includes an enclosure which is designed to replicate the look of a smartphone and which includes a desk stand offering pivot and tilt functions to suit landscape and portrait applications for users of any height.