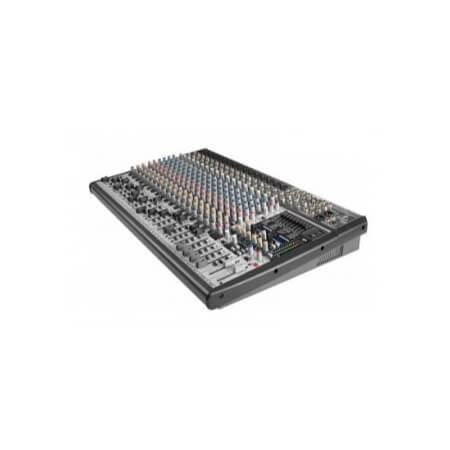 The Australian Monitor AM20FX Audio Mixer is a versatile and capable yet relatively easy to operate audio mixer supporting both mono and stereo inputs across it’s 20 input channels. It is suitable for use directly connected to active speaker systems or with passive systems via a suitable power amplifier.

Inputs are 16 mono and 2 stereo. The stereo inputs can be used as two seperate mono channels but gain and other controls are for both channels simultaneously. Each mono channel has both a mic level XLR and Line Level TRS input and features selectable phantom power, 75Hz low cut filter and controls for Gain as well as High, Mid and Low Range frequency boost/attenuation. Stereo channels feature the same controls minus the phantom power and filter controls. All channels feature a Channel Fader (Volume Control), selectable output groups (L-R, G1-2), L-R Pan control and an LED input meter.

Outputs are also plentiful with the main Left/Right (L-R) outputs provided via either a pair of XLR or TRS jacks but also available is the seperate Group Output (G1-2) as well as a pair of Auxilliary outputs, all of whcih use TRS jacks for connectivity. A line level output is also provided via a pair of RCA connections for recording purposes.

Also included on the Australian Monitor AM20FX Audio Mixer is a Graphic Equalizer and the option to route channels via this before output as well as a digital effects processor.

Hire Intelligence can provide the Australian Monitor AM20FX Audio Mixer for rental along with any active or passive speaker system, it is perfectly suited to rent along with the Turbosound Milan M12 Active Speaker system and is able to drive these speakers directly via the L-R XLR outputs without need for power amplifier or other hardware.