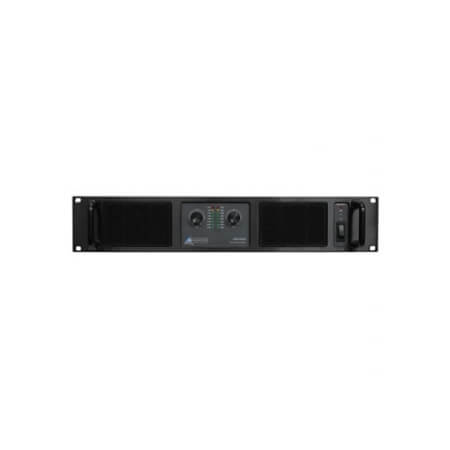 Able to deliver 800 Watts to each of it’s two channels when driving 8 Ohm speakers such as the DS-112, the Australian Monitor AMH3600 Power Amplifier can power two of these 300W speakers per channel with overhead and as such the amplifier could be used to power four 300W passive speakers altogether. The advantage of this amplifier/passive speaker system being that seperate power for the speakers is unnecessary and unlike with active speakers, full control over the output levels and other audio functions are at the amplifier or an upstream connected mixer.

Inputs are a pair of balanced Mic Level XLR’s and the Australian Monitor AMH3 600 Power Amplifier offers selectable handling of these inputs – in “Mono” mode, the Channel 1 input is routed to both outputs and volume control for both outputs is via Channel 1’s control. In “Stereo” mode, each input is routed to it’s corresponding output, each with it’s own volume control. A third mode, “Bridged” is also available and also just uses Channel 1 only for input but allows a larger speaker load to be driven than mono or stereo modes if wired correctly.

Outputs of the Australian Monitor AMH3 600 Power Amplifier are a pair of binding posts and a 4 Pole Speakon connector for each channel. Either can be used for Mono and Stereo configurations but for Bridged setups, the binding posts must be used.

Hire Intelligence can provide the Australian Monitor AMH3 600 Power Amplifier for rent along with suitable speakers as well as other hardware such as mixing desks as well as radio and cabled microphones.