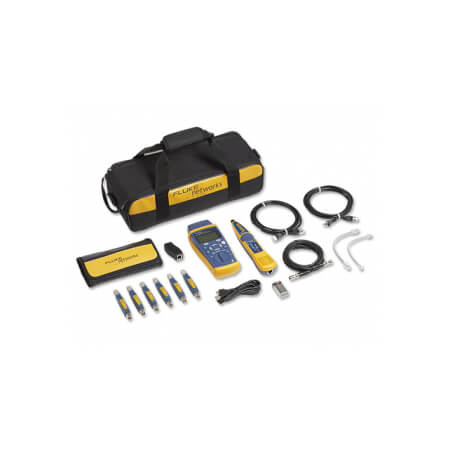 The Fluke CableIQ Network Qualification Tester is an indespensible tool for those looking to deploy even small cabled networks and is immediately available for rental from Hire Intelligence. The tester will work with both twisted pair and coaxial cables.

Able to operate on live networks, the Fluke CableIQ Network Qualification Tester can detect switch and device connected links. It can also be used to assess network capacity, allowing a user to determine how that network will handle support of various types of traffic such as VOIP, Data and Video. Another handy feature is the built in diagnostic tools able to measure such metrics as insertion loss (loss across the contacts of the connector), cross talk and noise issues.

The Fluke CableIQ Network Qualification Tester is also extremely handy for fault finding and just generally working with cabled networks via it’s built in graphical wiremapping function which is able to graphically represent connections and detail any errors, shorts or open connections. The reflectometer functions allow accurate measuring of cable lengths as well as enabling accurate distances to any faults along a cable or link to be instantly measured.

The Fluke CableIQ Network Qualification Tester is provided for rent as part of a kit that includes the Fluke IntelliTone Probe which when used with the built in digital toning technology makes physical location of cables and their conductors extremely simple.