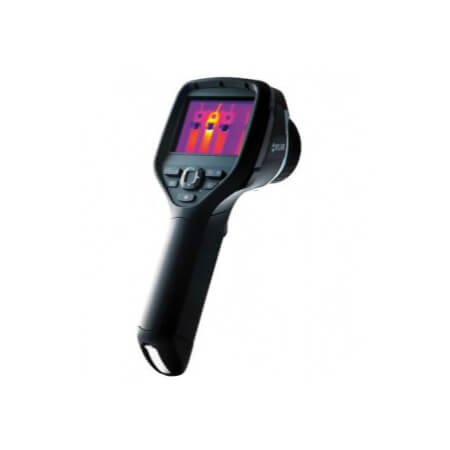 With a temperature range of -20 to 650 degrees Celsius, the Flir E40 Thermal Imaging Camera is suitable for a multitude of thermal imaging camera rental applications in the electrical, mechanical and building industries alike.

For electrical applications, nothing beats thermal imaging for rapid detection or location of faults in switchboards, cabling and other circuitry where excessively hot sites or components can be easily distinguished from their surroundings. The integrated laser pointer aids in location and the in-built LED light assists with illumination of the target area.

Suitable for a range of industries
In the mechanical fields, the Flir E40 Thermal Imaging Camera will suit those looking to rent a product able to rapidly detect hotspots in mechanical systems caused by such problems as lubrication failure or component fatigue. Again the in-built laser pointer and LED light will aid in precise location even in the most difficult of environments.

For the building construction and management fields, the Flir E40 Thermal Imaging Camera also provides a useful tool. Particularly when it comes to insulation where faults and gaps in insulation are rapidly identifiable using thermal imaging. The Flir E40 Thermal Imaging Camera can also be used to detect other building issues where the resulting temparture variance between materials can be identified on the camera such as moisture leaks and termite infestations.

The Flir E40 Thermal Imaging Camera is able to record digital still or video content to SD-Card media and has annotation functionality to allow recording of voice comments along with video or picture data via an optional Bluetooth headset. Also included is MeterLink wireless connectivity allowing the Flir E40 Thermal Imaging Camera to interact wirelessly with other MeterLink equipped devices such as Current Clamps or Moisture Meters.

Hire Intelligence provides the Flir E40 Thermal Imaging Camera with a hard carry case and accessories such as battery and charger as well as the required SD Card media which can be returned or purchased post rental.