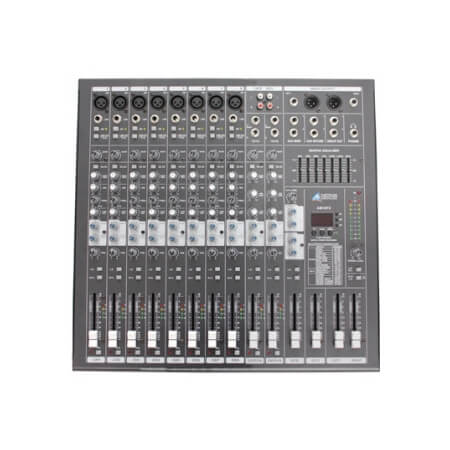 The Australian Monitor AM12FX Audio Mixer provides a rental solution for those looking to mix up to 8 mono mic or line inputs and/or 2 stereo inputs with full control over each input and the various outputs.

The 8 mono inputs on the Australian Monitor AM12FX Audio Mixer feature a Mic Level XLR inut and Line Level TRS jack, either of which can be used. Included with each mono input is Phantom Power inertion, Low Cut filter, Gain control, High, Medium and Low frequency boost/attenuation controls as well as Pan L-R, and of course a Fade (Volume) slide. Each mono input also features a LED signal strength meter.

The two included stereo inputs utilise a pair of TRS jacks and are intended for Left and Right (L-R) components of a stereo signal but could also be connected to two individual mono signals provided that controlling the High, Mid and Low Frequencies as well as the volume for both signals simulatenously was acceptable.

The Main outputs on the Australian Monitor AM12FX Audio Mixer are Left and Right (L-R) via a pair of XLR or TRS jacks. Individual Fader (Volume) sliders are provided for the left and right channels. A secondary, Group Output is also provided which utilises two TRS jacks but only has a single Fader control for the group. Auxilliary outputs (TRS) as well as a line level output (RCA) for the purposes of recording are also provided.

The Australian Monitor AM12FX Audio Mixer is perfect for use with any of the powered speaker systems available to rent from Hire Intelligence such as the Turbosound Milan M12 Active Speaker or for adding up to 8 additional microphone and two stereo inputs to systems such as the Mipro MA707.