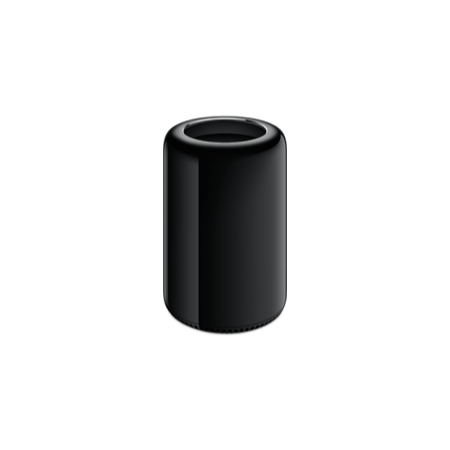 The Apple Mac Pro 6 Core Professional Workstation is a high performance workstation rental option in a convenient package. Mac Pro features 3D Production and premier editing applications as well as CAD applications where an iMac pro platform is a must.

The Apple Mac Pro 6 Core Professional Workstation is a stainless steel tower, and is affectionately known as the “Trash Can” due to it’s unusual modular design. As one of Apple’s most powerful computers, it’s specs are anything but rubbish. The Mac Pro 6 is designed with Mac’s most powerful memory system: 28 CPU cores of power and 6 channel memory system. Whether you are managing heavy data sets, large-scale apps, or high-processing graphics, this Mac Pro desktop is designed to handle it. Specs include a 3.5GHz 6 Core Intel Xeon E5 CPU backed up by dual AMD FirePro D500 Graphics Processors, each with 3GB of Video RAM. Standard RAM configuration is 16GB but the Apple Mac Pro 6 Core Professional Workstation can be expanded to 64GB if required.

This workstation also comes with six channels of ECC memory and 12 physical dual in-line memory module (DIMMs) slots. Standard storage is a 256GB SSD. Connectivity is expansive with no less than six Thunderbolt 2 ports able to support external displays or peripherals, as well as four USB 3 ports. Shared L3 caches and a large L2 come fully featured, as well as eight 64 PCIE expansion slots for additional graphics cards. Apple also built this model with extreme performance in mind. With the Mac Pro Expansion Module, or the MPX Module, you can expect high-quality and performance-driven graphics capabilities for a wide range of computing. Manage 3D filming or building gaming architecture with ease. Connect to a Mac Pro display for crystal clear image quality.

This Mac Pro desktop is available to hire, and offers fast processing and the latest OSX. With a workstation, you no longer need to worry about poor battery life when working with laptops. This workstation can be rented along with an iMac pro retina display. The Apple Mac Pro 6 Core Professional Workstation can be “rolled back” to OS10.9 Yosemite for those requiring an older operating system on their Apple computers. Also available to rent is the option of running Windows technology, Microsoft and Apple apps, similar Mac Pro models and the Mac Pro stand.